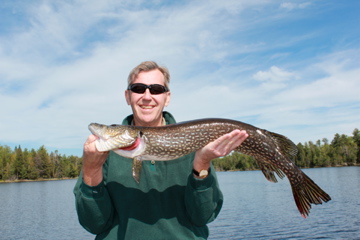 News | Comments Off on John Kangas’s 34th Chairman II Outing
John, Bennett, David, Bill H., Jim, Jeff, John Den, Doug, Bill R. and Dave began arriving Friday and Saturday –  this was the beginning of John Kangas’s 34th annual trip to Rainy Lake Houseboats on the Chairman II.  The group played golf at the Falls Country Club on Sunday June 2nd and then dined at the Thunderbird Lodge in the evening while enjoying the Blackhawks’ win over the Kings.
Monday we left port at 7:30 AM and enjoyed a breakfast cruise to Brule Narrows where the Chairman would moor for the next three days.  Bill Dougherty, Jon Balaski and Kevin Erickson crewed the Chairman II on the way to the Brule while the other guides  – Norm Wood and Tony Snyder – met the Chairman after it was moored.
We run the nicest guide boats available.  Billy has a 2013 Lund Pro V GL 208  with a 250 hp Mercury Verado Pro, Jon has a 2025 Pro V IFS with a 250 hp four stroke motor and Kevin runs a 2013 Lund ProV 197 GL with a 225 hp Mercury Verado.  We all have Humminbird electronics for our GPS and fish finding needs.  Our company believes that great boats are built in Minnesota and Lund Boats are some of the best.  Behind every great boat and motor combo is a dealer.  Ours comes with great dealer support.  Badiuk Equipment is located on Highway 11 East International Falls, MN 56649.  Phone: 218-286-0813. http://www.badiukequipment.com/ 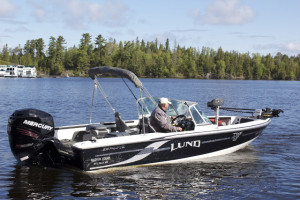 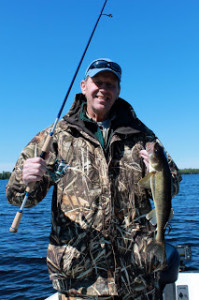 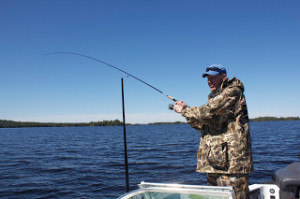 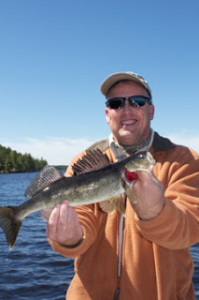 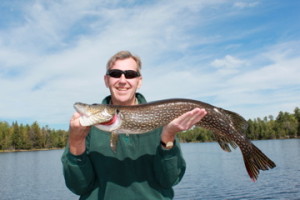 About a 160 walleyes were caught along with quite a few pike.  Walleyes were active on both jigs with a minnow and artificial bait. A 23 ½” walleye was the largest for the day. There were several nice pike caught, John Den led the way with a 39” northern caught on a gold Johnson Silver minnow, John K. caught a 35” pike on a buzz bait and Doug caught a 37” pike on a jerk bait. 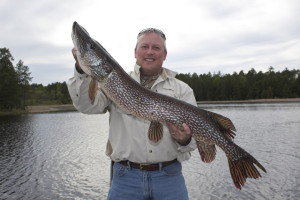 The guides brought everyone back at 6:00 PM, a social hour ensued and Chef Bernie served a chicken and rib dinner with his famous tollhouse pie for dessert. 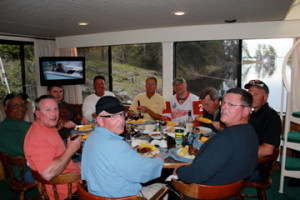 Tuesday morning started with fresh coffee and Chef Bernie’s French toast, fresh fruit and homemade pork wild rice sausages. The Chairman guides arrived at 7:20 AM and the group was off at 7:45. The plan was walleye fishing and meet at noon for a Rainy Lake walleye shore lunch. 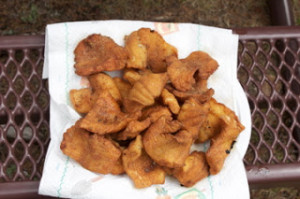 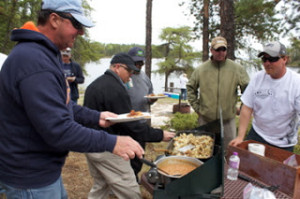 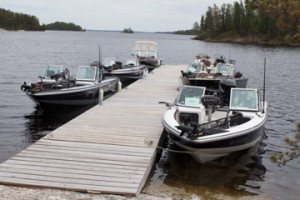 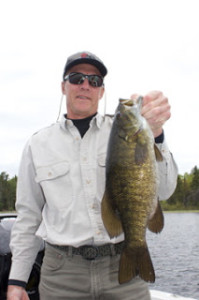 Fishing was excellent, walleyes bit well all day long.  Luckily, the weatherman was wrong.  He predicated a 40% chance of rain, but we never saw a drop!   Back to the Chairman for cocktails and Bernie’s secret pork chops, spectacular wild rice and home made cheesecake (better than New York cheese cake). 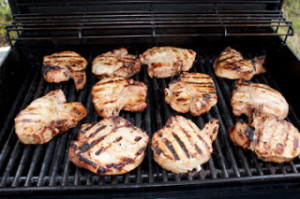 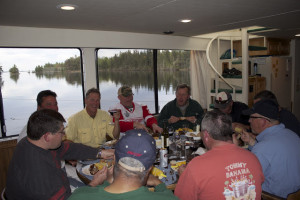 Blackhawks and Kings for a nightcap.
It was time for our guests to enjoy an eggs benedict breakfast before the last day of fishing. Very similar day to Tuesday with southeasterly winds, mid 50 degree temperatures and sunny!  Walleyes, smallmouth bass and northern pike were very active. Walleyes bit one after another until the big pike moved into the points looking for a walleye dinner.  We met a little earlier for shore lunch as the Chairman II heads back to port about 4:00 PM with an evening dinner cruise on the way in. 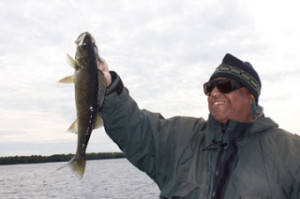 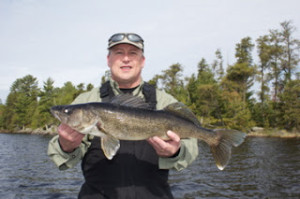 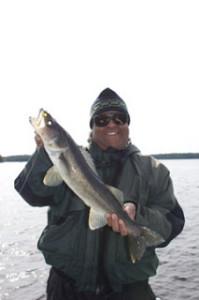 An afternoon of pike fishing was on the agenda. Pike were located on main lake islands, points in bays and the black bottom muddy bays.  Single bladed buzz baits, Rapala X-Raps, and Johnson Silver Minnows. Fishing was good big pike, big bass, and walleyes to 27”. It does not get much better – great clients, good fishing, great food, great boat and the prettiest lake in North America. 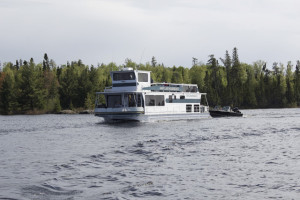